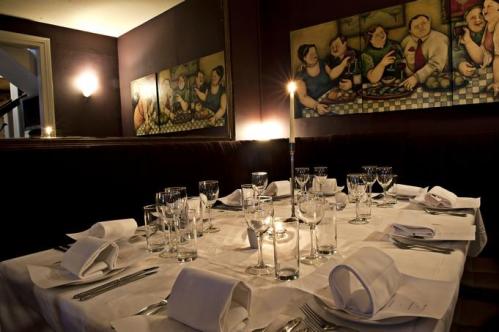 One of my pet hates when eating out, is being forced into a set menu.

And what’s guaranteed to raise my hackles in such a situation, is when two dishes (of the limited range) on the set menu, are off the menu.

And, when said set menu, with no option to shorten to two courses, carries a price tag of €49 per head – well, then no amount of wine, or the dubious privilege of doing some D-list Irish celebrity spotting, is going to prevent my blood from boiling over.

Such was my experience at Dublin stalwart Unicorn on Merrion Row, last Friday night.

A group of six lovely ladies of varying vintage, including my Mum and I, were on a pre-Christmas night out which had been organised with great care by one of the group. We met in the Shelbourne for drinks, which although still clearly a pick-up joint for the over-40’s (hey, I may need it in a few years), is always a festive spot for a drink and a people-watch at this time of year. After a quick gin & tonic and a gossip, we chattered our way across the road and down the lane to the Unicorn.

I’ve been in the Unicorn quite a few times in the past, mostly for work-related lunches and dinners back in my advertising days, and remembered loving the buzzy atmosphere and the amazing antipasti lunch buffet. So I was looking forward to the chance to review an old favourite, rather than new, for the blog. A night out in Dublin with the Mammy was a nice novelty too.

It still feels like a special occasion when you enter the Unicorn. The bar in front, the buzz of conversation and clinking glasses and our white-clothed corner table with comfy sofas and a tall candelabra in the centre, all whetted our appetite for a top-class evening ahead. But, after saying only a couple of posts ago that I was unlikely to ever use this blog to have a pop at Dublin restaurants, unfortunately that didn’t altogether turn out to be the case.

Now, I’m no restaurateur, but I’m going to go out on a limb and advise that if you have a set starter menu consisting of four items, one of which is a soup, two of which are pasta-based, and the fourth of which is a delicious-sounding scallops & ham-hock dish, you might need to make sure you have enough of the flipping things to last you through a busy Friday night’s dinner service. None of us liked the sound of cauliflower soup; and carb-avoiders like myself were ruling out mushroom pastilla or tortelloni, so we were all ready to order scallops to start us off. Apologies, said our very jovial waiter, we’ve run out of scallops. Hot-smoked salmon, served cold, was our option instead. We felt a bit forced into it, even though it tasted good (albeit flavoured with a tinge of disgruntlement).

Moving onto the main courses, things were looking up. Roast loin of venison for a couple of us, and grilled medallions of beef for my Mum, were solid, stylishly presented dishes enjoyed by most of us who stole bites of them around the table. However, what was admittedly a lovely fresh piece of fish in my ‘Pan-fried cod with red pepper puree and wilted spinach’ main course, was spoiled by the fact that it was floating in a puddle of what, if I was feeling charitable, I’d call jus. But, as there’s no place for charity on a €49 set menu, I’ll call it what it was – which was essentially fishy water. This rendered the potato fondant underneath the piece of cod soggy, and pretty much inedible. I washed it down with a delicious glass of Nautilus Sauvignon Blanc, and buttoned my lip so as not to spoil our night by complaining.

Given there was no option not to have dessert (which I know sounds like a brilliant excuse to indulge), I felt I surely couldn’t miss by ordering tiramisu in a reputable Italian restaurant.

In its’ favour, the tiramisu arrived attractively served in a kilner jar, looking creamy and with the right amount of layers within. But as we greedily dug in, expecting it to be a highlight of our meal, we found no discernable trace of any alcoholic ingredients whatsoever. My Mum, who is known for her particularly potent tiramisu, was sure she’d do a better job.

As a compensation for complaining about the earlier disappointment with the starter menu, and because one of the main course choices had also been declared off, one of the group was “allowed” to have a cheese board for dessert with no extra charge, and a very good selection of cheese, grapes and home-made biscotti was shared around the table. We were also sent an extra glass of wine at the end of the meal for those of us drinking white. Hmm, for a price tag of not much less than €100 a head with wine, we’d just have preferred if what we had wanted had been available in the first place.

So, a disappointing experience of the Unicorn, but thanks to the lovely company, an enjoyable night all in all. Well-heeled Dubliners will continue to flock here, as it’s a social scene in itself, but I think there’s much better value, food and fun to be found elsewhere these days.