Whitefriar Grill. We sat in that little corner down the back…

Since I’ve started writing this blog, a lot of people have been asking if, or when, I’m going to start “slating places.”

The reality is, that while I dream of being able to come up with such gems as this one from AA Gill in the Sunday Times last weekend:

“The menu is short and beside the point, really. The food is there to be ordered collectively and forgotten or thrown, or eaten with your mouth open while imitating northern people.”

I didn’t start this blog so that I could become some sort of mean mystery-shopper who delights in anonymously slating Dublin restaurants. They’re having a hard enough time of it as it is. Chances are, I’m only going to decide to spend my precious time and cash somewhere that I’m pretty sure will be good based on others’ recommendations, or am curious enough to check out and find something at least constructive to say.

So, this is all a rather roundabout way of leading into “another” glowing review. But believe me, it’s deserved, as those of you who have visited this place will know already.

A couple of weeks ago I was entertaining my sister for the weekend, and was looking for a Saturday early bird deal that we could avail of before heading to a gig that night. Their brilliant value early bird menu was a perfect opportunity to try out the Whitefriar Grill, a place that I’d been hearing a subtle, mostly brunch-related buzz about for a while. They do 2 courses for €18.50 or 3 for €21.50, which knocks the socks off most rivals in terms of price, and also offers a more generous time slot (5-7pm) on a Saturday than you’ll find elsewhere.

A serendipitously positive review from Catherine Cleary in the Times on the day we visited was enough to reassure our third dining companion – let’s call her the D4 Die-Hard – who would otherwise have wondered why on earth you would go to Aungier Street for dinner on a Saturday night.

We took our table at 6.30, and loved the simple but cosy candlelit surroundings which I’m guessing work equally well by day or by night. We ordered a bottle of ‘The Stables’ Marlborough Sauvignon Blanc (€30) and browsed the choices on the early bird menu. Having heard that these guys are all about their meat (I guess the clue’s in the ‘Grill’ bit), I went meaty for my starter and chose the Jack McCarthy’s black pudding with oxtail and fried quail’s egg.

This was an outrageously flavoursome dish and I found myself eating it in tiny bites to make it last as long as possible. My D4 Die-Hard had the gambas pil-pil on crushed tomato toast, a large portion with some truly giant prawns on top of toasted, tomato-ey sourdough bread. 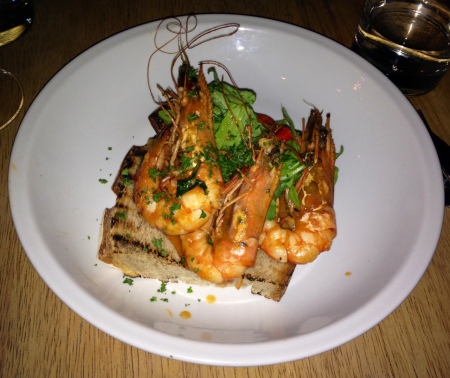 My sister’s salad of saffron-poached pear, gorgonzola and raspberry vinaigrette looked slightly inferior in comparison to the other two mightily meaty starters, but was a perfectly tasty option in its own right.

You’ll be glad to know that my steak craving is on temporary hiatus, so I opted for roast fillet of hake which arrived beautifully crispy, presented atop a plank (more food on wooden boards!) and accompanied by new potatoes, peperonata and fine beans. It was a generous portion of fish and I found myself disagreeing wholeheartedly with the criticism in the Irish Times review that the hake they’d had was dry, as mine was succulent and tasty, a view shared by my sister who was stealing from my plate/plank in between bites of her own tandoori chicken (with Bombay potatoes and mint yoghurt).

Full of good cheer (and halfway through a second bottle of wine), we all decided to go for dessert and I had a Bailey’s and cherry creme brulee, which was presented in a simple ramekin dish – perfectly hard and crunchy on top, creamy and cool underneath, with just the right amount of Bailey’s flavour running through it. The other two were getting stuck into some excellent chocolate fudge brownies – a staple dish on many menus but here, artfully stacked on the plate along with ice-cream and cream. The corner I nicked from across the table tasted very good indeed.

So, the damage. Three early birds, two bottles of wine, and a couple of coffees set us back just over €40 each. I could happily have stayed ensconsced in the back of the Whitefriar all night, but the downside of the early bird option is that the next round of paying punters are snapping at your heels by 8pm.

So it was time to move on, back out into the chilly Aungier Street air, and ready for our night out to begin.

I’ve already been back for brunch once since then (there’s only one word for their Pork Belly Florentine and that word is ‘OMFG’), and have also booked a big table in for our Christmas LLLL,* when we will be very much looking forward to trying out the cocktail menu.

So sorry, no slatings here just yet.